If you watch CNN Newsroom every Monday then, you must be familiar with the name Jim Sciutto.

To those who don’t know Jim Sciutto, he is an American news anchor and author.

In addition, the author has served more than two decades as a foreign correspondent.

In the article, we have mentioned detailed information about the news reporter Jim Sciutto.

Here are some quick facts about Jim Sciutto:

Emmy- Award-winning journalist was born in Manhattan city of United States of America.

Jim’s father was US Navy Veteran. Unfortunately, he passed away in 2007.

Moreover, Sciutto has siblings, but there’s not much information about them.

Similarly, he joined Yale University, where he graduated with a bachelor’s degree in Chinese history.

In addition to that, Sciutto is an associate’s fellow at Pierson College in Yale.

Furthermore, he was also a selected member of the Council of Foreign Ministers in 2008.

Jim stands tall at 6 feet and one inch (1.85 m). There is no information about his weight. However, he is slim built.

In addition, the new reporter has hazel-colored eyes and brown short hair.

As he was born in March, Sciutto’s zodiac sign is Pisces.

Like the personality trait of Pisces, Jim is open-minded, empathetic, and non-judgemental.

Similarly, his birthstone is Aquamarine.

Initially, Sciutto started his career in television by serving as the producer and moderator of the PBS program, The student press.

It was a weekly public affairs talk show which was largely aimed at the students in college.

He is a former government official who has served as correspondent Chief National Security.

While working as a correspondent, Jim’s topic of concern was the military, intelligence community, terrorism, and foreign policy.

Moreover, Jim was an appointee of Obama’s administration.

Further, Jim served as a senior chief of staff for three years from 2011 to 2013 to Gary Locke, the US Ambassador for Beijing, China.

Jim is co-anchor of CNN newsroom which airs on CNN every Monday to Friday at 9 a.m. In addition, his co-anchor is Poppy Harlow.

Sicutto had reported throughout the Middle East, Europe, Asia, and the Arctic.

He has played a significant role in CNN’s overseas coverage of the terrorist attack on France, Charlie Hebdo, and the violent election in Ukraine.

Jim Sciutto has also worked for ABC News. Moreover, in ABC News, he served as a senior foreign correspondent.

Primarily, he was based in London, but later, he shifted to Washington D.C.

Sciutto has reported from over fifty countries, including Afghanistan, Iraq, and Iran.

Jim Sciutto is also an author. Altogether, he has written three books.

His first book, “Against Us: The New Faces of America’s Enemies in the Muslim World,” was released in 2018.

In addition, this book analyzes and reveals the driving force behind Islamic radicalization.

Similarly, in 2019, his second book titled “The Shadow War: Inside Russia’s and China’s Secret Operation to Defeat America” was released.

Moreover, this book analyzes the invisible fronts that make up 21st-century warfare, such as advanced satellite weapons and disinformation campaigns.

His third book, “The Madman Theory: Trump Takes on the World,” was released in 2020.

This book takes a look and analyzes then US President Donald Trump’s foreign policy.

He was awarded the Edward R Murrow award for his reporting from Iran during the election protest in 2009.

Jim was able to achieve Geroge Polk Award for his excellent undercover reporting from Myanmar.

You might want to read about Sara Gore: Early Life, NBC, Husband & Net Worth>>

They earned Merriman Smith Award for the report on how the intelligence community believes Russia had compromising information on then president-elected Trump.

Jim is married to Gloria Riviera. He completed fourteen years of marriage with his wife.

Sciutto married the love of his life, Gloria Riviera, in October 2006.

At that time, Riviera and Jim both were working as News correspondents in London.

Who is Gloria Riviera?

Gloria was born in Idaho, United States of America, as Gloria Sinclare Riviera. In addition, the exact birth date of Gloria is unknown.

Sinclair is Gloria’s middle name and as well as her grandmother’s maiden name.

Unfortunately, Riviera lost her father in 2016 as her father was battling Cancer.

In addition, Sara Riviera Cureton and Jodi Riviera Buchanan are her sisters.

Gloria has a lot of siblings because her mother was the second wife of her dad.

Moreover, Riviera has a multicultural heritage.

Gloria was a graduate of the local school in New Hampshire.

And Riviera then joined New York University, where she earned a master’s degree in Journalism.

Like Jim, his wife has also worked as a TV correspondent.

Riviera has been working with ABC News for more than two decades.

Currently, Gloria Riviera is working as a news correspondent for ABC News in Washington D.C., United States of America.

Moreover, her estimated salary is $10,000 per year. Similarly, Gloria’s estimated Net Worth is $2 Million.

Before joining ABC News, Gloria worked as a journalist in BBC News. Besides, she was also an athletic person.

Moreover, Jim Sciutto is Gloria’s second husband. Before, she was married to William Hughes III in 2002.

The then Ketchum, Idaho mayor, was the main guest in their wedding party.

However, Gloria and William got a divorce. But, Gloria has not disclosed the reason behind the divorce.

Finally, Gloria lives a happy and fulfilled life with her husband, Jim Sciutto.

Jim and Gloria have three children. Moreover, they have two sons and one daughter.

Their son’s names are Caden Charle and Tristan James. Similarly, their daughter’s name is Sinclair Elizabeth.

Jim’s second son was delivered at home, but they said they weren’t planning to deliver the baby at home.

You might want to read about James Brown Bio: NFL, Weightloss & Net Worth>>

Jim is one of the successful news anchors of all time.

Therefore, he earns enough to live a happy, comfortable, and lavish life in Washington D.C.

Their property record shows that the couple bought 5 bedroom house for $1.37 Million in 2014.

The 52 Years Old American news anchor is available on all social media platforms.

He has over 98k followers on Twitter, while he is following only over 1k people. Moreover, Jim joined Twitter in 2009.

Similarly, Sciutto is also famous on Instagram. He has over 30.3k followers.

Jim usually uploads photos related to travel, news, family, and so on.

However, Jim closed his Facebook page, stating that he didn’t see the positive function in the Facebook platform.

In addition to that, Jim Sciutto also has a website.

How did Jim Sciutto and Gloria Riviera meet?

Jim Sciutto and Gloria Riviera met in their workplace and fell in love with each other.

What is Jim Sciutto’s real and full name? 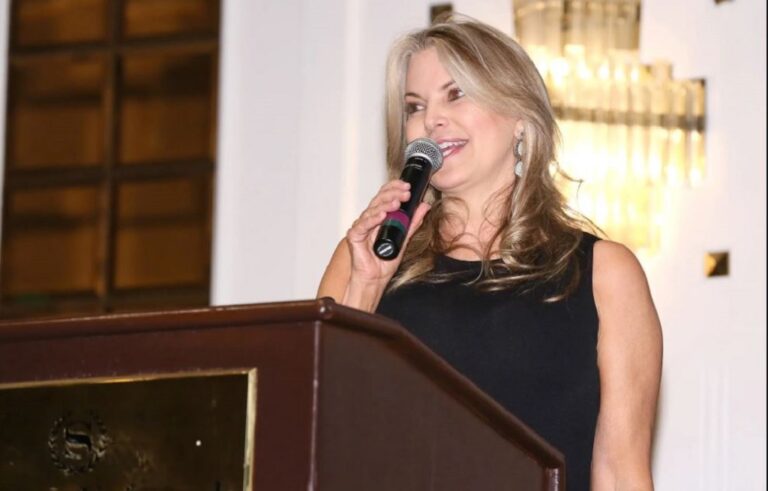 Rebecca Grossman has been arrested and taken into custody on a murder accusation. Grossman drove too aggressively when her parents struck youngsters crossing the street in Westlake Village. According to reports, Grossman kept going after hitting the kids but stopped a quarter-mile later because of an engine cut. The co-founder and executive director of the…

Karen McCollum is the ex-wife of Scottie Pippen, an American professional basketball player. Moreover, McCollum was born in the United States of America. Karen also shares a child named Antron Pippen with her ex-husband Scottie Pippen. McCollum also appeared as a pianist on the second season of the CW show Dynasty. In the article, we…

Baxter Neal Helson is an Ace American talented drummer. Helson is also recognized as the ex-husband of an American actress and producer, Tish Cyrus. Baxter is the biological father of musician Trace Cyrus and actress Brandi Cyrus. Moreover, Billy Ray Cyrus adopted both of them. This talented drummer has had several ups and downs in…

Rebecca Soteros is an ex-girlfriend of a late Hollywood actor, Paul Walker, best known as Brian O’Conner from Fast & Furious. She got the media attention after her relationship with Paul, which started in 1998.  They also shared a beautiful daughter, Meadow Rain Walker, even though they weren’t together for such a long period. Rebecca…

Titus Low sexuality is a matter of massive interest. Fans have been asking questions about the YouTuber’s hype for unfortunate reasons. As the young internet personality is sent to jail for weeks, let us look closely at his personal life and professional career.  Titus is one of the fastest-growing Internet personalities, originally from Singapore. Before…