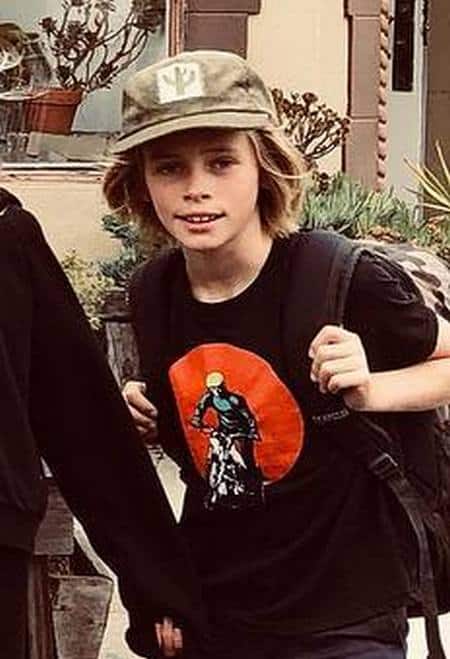 Have you seen the nineties classic movie called Pretty Woman? If you have, you must also be encaptivated by the beauty of Julia Roberts.

Phinnaeus Moder is no exception to that case: the son of American actress Julia Roberts and cinematographer Daniel Moder.

The Academy winner Julia Roberts got married to Daniel Moder in 2002 and since then have been together.

Hazel and Phinnaeus Moder are twins who are only a couple of minutes apart.

They have been in the spotlight since the moment they were born.

Though they are teenagers, their lives are entirely different from most, with people constantly focusing on them.

Further, Phinnaeus comes from a family of actors like his cousin Emma Roberts, already a known actress.

So it is expected that Phinnaeus will also follow the same path as the rest of his family.

This article will find all that you need to know about Phinnaeus Moder.

Here are some quick facts, just if you did not know about the young Phinnaeus Moder.

Phinnaeus Moder was born on November 28, 2004. He was born in Los Angeles, California, in the United States of America.

He is still currently residing in California. Phinnaeus is an American citizen.

Similarly, he has not revealed his religion, but his mother follows Hinduism. His ethnicity is caucasian.

Julia Roberts is an actress by profession, while Daniel is a cinematographer.

They met when they were on the set for the movie The Mexican in 2000.

However, both were dating different people; Julia was engaged to Kiefer Sutherland, and Daniel married make-up artist Vera Steimberg.

Further, it was after the divorce that the two got together.

After dating for one year or so, the two decided to marry.

And just two years later, Julia and Daniel were blessed with twins.

Further, the twins were born eight days before the due date via C-section because of Julia’s difficult pregnancy.

They had a third child in 2007. Phinnaeus is seen having fun with his parents all the time. In 2013 the media saw him riding a bike around town in Malibu, California.

They have been spotted in gym sessions with their mother and playing water sports and surfing.

Similarly, the couple lives together with no rumors of conflict or separation.

Unlike other fragile Hollywood marriages, it looks like theirs is here to stay.

Talking about physical appearance, Phinnaeus’s height and weight is unknown.

He has red hair and brown eyes. He has a thin body figure and a fair complexion.

Being born in November, Phinnaeus is a Sagittarius in the zodiac sign. They are a fire sign and are known to be impulsive.

Sagittarius people are also known for being extroverted and extremely friendly. Sagittarius loves traveling a lot and is a freedom lover.

Further, they are known to have an artistic side and are optimistic.

Sagittarius is often open-minded and enthusiastic, clearly seen with Moder, who is young and open to life.

Phinnaeus is still studying in high school. We do not know the high school’s name, but it is a private and elite school.

He has not revealed where he wants to go for further education.

And it seems he is still figuring out his career; with all the acting genes in him, he is expected to appear on-screen.

Phinnaeus comes from a family of actors and playwrights.

Some of the notable ones are Eric Roberts, Lisa Roberts, John Moder, and Nancy Motes.

Phinnaeus appeared on-screen in 2006 in VH1: All Access in 20 Cutest Celebrity Babies.

Both Phinnaeus and his sister Hazel were featured.

The twins also made a guest appearance alongside their mother in a comedy film, Mother’s day, in 2016.

So when the time comes for Phinnaeus to debut, a path has already been carved for him.

Talking about his love life, Phinnaeus is single as of now.

Maybe he is too young to be dating or just focusing on his studies.

We are unsure of the reason. Phinnaeus has kept his love life very private.

She is an actor and producer.

She has been the leading lady in 24 movies that have earned more than $100 million at the box office.

The actress is one of the highest-grossing actresses of all time.

Julia wanted to be a veterinarian and play the clarinet as a child.

She went to Georgia State University but did not graduate and moved to New York City.

There she was discovered by a modeling agency and started taking acting classes.

The actress made her debut in 1988 with the movie Satisfaction.

Then she appeared as a Juvenile rape victim in Crime Story but her most critically appreciated role came in the movie called The Mystic Pizza in 1988.

In 1989 she was featured in the movie Steel Magnolias, from which she got her first Academy Award nomination for best-supporting actress.

And her first Golden Globe wins in The best-supporting actress.

Her most successful films include:

The actress’s most recent role was in 2017 in the movie called Wonder, after which she took a hiatus from Hollywood.

Daniel is a renowned cinematographer famous for his works in movies like Fireflies in the garden, The Mexican, and Secret in their Eyes.

The cinematographer has a psychology degree from the University of Colorado Boulder.

Daniel began his career as a production assistant in the movie Crimson Tide in 1995.

Then, the consecutive year, he worked on a sports drama film called The Fan.

Then he worked in the camera and electrical department for movies like Enemy of State, The brave, The big tease, and Tuesdays with Morrie.

The cinematographer made his debut with the short movie called Kid Quick in 2000.

He has worked as a cinematographer in films like:

Daniel has done his cinematography in several short movies and continues to work in films like Mona Lisa Smile, Mr. and Mrs. Smith, and Friend with Money.

His most famous work is in the movie Spiderman-3, and his most recent position was in the Ibiza movie in 2018.

He has also worked in TV Series such as Dead to Me and The Last Tycoon.

Similarly, he was nominated for Primetime Emmy Awards for Outstanding Cinematography in the movie.

Likewise, Daniel was also nominated for an OFTA Television Award for Best Cinematography in a Non-Series.

Daniel has always been a devoted father and a loving husband despite his career.

Even with his busy schedule, the cinematographer makes time for his children and is often spotted on vacations.

Phinnaeus has two siblings. One is his twin named Hazel.

Like her mother, Hazel also wants to step into the entertainment business.

Further, she was featured in the VH1 episode and on Mother’s Day.

Phinnaeus’s younger brother is named Henry and was born on June 18, 2007.

Phinnaeus has not started working for him to have a net worth.

But with, the massive fortune that his parents have amassed guarantees them a lavish life.

Julia Roberts is one of the most fortunate actresses in Hollywood, with many box-offices hit films.

Julia Roberts has an estimated net worth of approximately $200 million.

Further, she runs a production house by Red Om Films.

Julia Roberts has signed several brand deals. She has a five-year agreement with Lancome worth $50 million.

She owns a house in Malibu worth over $6.4 million.

Julia resides with her family in her $30 million mansions in Los Angeles.

No, Phinnaeus is still in school and has not started his career.

We hope Moder will start his acting soon, as it is beneficial to start early!

No, Julia did not quit Hollywood but took a break from movies to become a full-time activist amidst the pandemic.

Top 11 Models who have walked at London Fashion Week