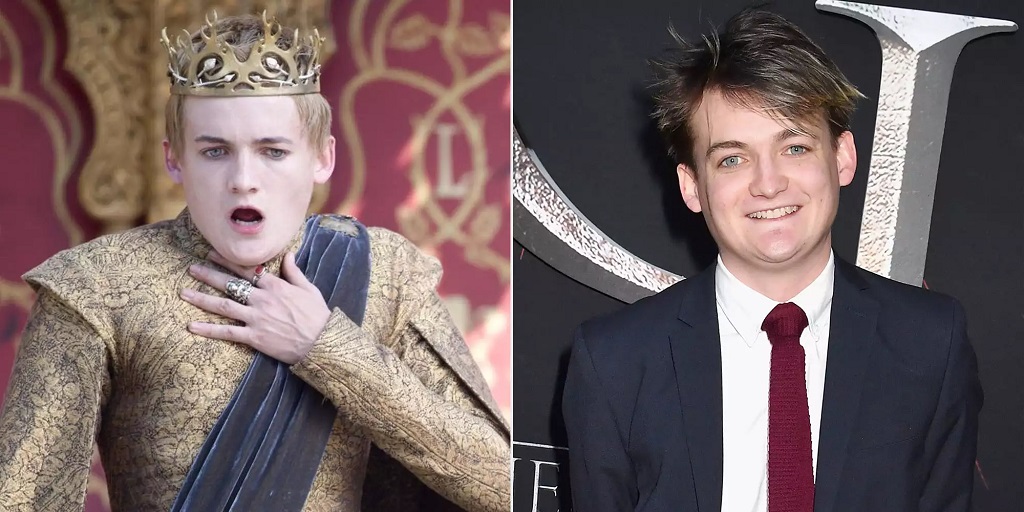 Jack Gleeson of Game of Thrones married his lover Roisin O’Mahony in a ‘dignified’ ceremony in County Kerry, Ireland.

The 30-year-old actor, widely known for his role as Joffrey Baratheon in the HBO series, married his actress partner at The Sacred Heart Church in The Glen, Ballinskelligs.

In the romantic wedding photos, Jack looked dapper in grey slacks and a green shirt, which he paired with brown suit shoes.

For the occasion, the Irish-born actor had a well-groomed beard and slicked-back dark hair.

Meanwhile, his bride Roisin looked stunning in a pastel patterned pink and blue silk gown with a matching shawl.

The comedian accessorized her stunning attire with a tiny silver necklace and teal heels.

To complete her bridal look, she clasped a bunch of pink flowers in her hand and dressed her brunette hair in natural waves.

Age Difference Between Jack Gleeson And His Wife, Róisín O’Mahony

Jack Gleeson was born on May 20, 1992, and his age is 30 years. In comparison, his wife Róisín O’Mahony’s age has not been revealed yet.

Hence it isn’t easy to calculate their age difference currently.

However, Róisín O’Mahony seems to be in her mid 20’s.

Gleeson was born in the Irish city of Cork and raised in the Dublin suburb of Ranelagh, where he attended Gonzaga College. His two older sisters, Rachel and Emma, are both prominent in Irish theater. When he was younger, he took acting classes with them and even acted in youth theater.

He studied philosophy and religion and was named a university scholar in 2012. Gleeson was a member of DU Players at Trinity, where he met his future Collapsing Horse Theatre Company co-founders.

Jack Gleeson Parents: Who Are They?

Jack Gleeson was born to his parents in Cork, Ireland.

His parents’ names have not been disclosed yet.

He has two sisters, Rachel and Emma Gleeson, with whom he attended a local community theater organization as a child.

He is a reclusive individual who prefers to retain his privacy and avoid unwanted media attention. He never enjoyed the life of a star, which is why he left his acting career despite earning so well.

As a young lad, Jack Gleeson joined his local community theater to do anything other than study. This led to him appearing in a few shows and paving the path for a career as an actor.

In 2002, he played ‘Jack’ in the short film ‘Moving Day.’ This was followed by two further performances as a backup actor in similar short films, ‘Fishtale’ and ‘Tom Waits Made Me Cry.’

Jack Gleeson Net Worth In 2022

According to celebritynetworth.com, Jack Gleeson is a wealthy Irish actor with a net worth of $6 million.

For his negative portrayal in the television drama, Jack Gleeson received multiple nominations.

He was nominated for Best Performance by a Younger Actor in a Television Series at the Saturn Awards, as well as the Young Hollywood Award: We Love to Hate You.

He was also nominated for Outstanding Ensemble Performance in a Drama Series at the Screen Actors Guild Awards in 2011 and 2013. He was named the IGN People’s Choice Award winner for Best TV Villain (2012-13).

Gleeson hasn’t tried out for any other roles in films or television shows since his final appearance on the show. In his own words, he revealed that he was not a fan of acting and that he pursued the business only because he thought it was worth a shot.

Also Read: Dominick Cruz’s Wife – Is He In A Relationship With Kenda Perez? Here’s What We Know

Benjy Brock has duped the viewers after his unrealistic transformation. Howard Stern flexed his slim body and mentioned that he lost almost 100 lbs, i.e., 45 kg. Benjy Bronk was born on September 4th, 1967. The 55-year-old works as a writer for Sirius Satellite Radio; Penn State University is where he earned his BA in…

Sharon Tate crime scene is one of the most controversial ones in history because of the story behind her murder.  Sharon was one of the most influential actresses and models of her time. During the prime of her career, there were rarely any other people who carried as much fame and aura as she did….

Carrie Coon’s parents, John Coon And Paula Coon have supported her in building her career. Carrie Coon is most well-known for her work on the FX “Fargo” and the HBO television series “The Leftovers.” She has made film appearances in “Gone Girl,” “The Post,” “Widows,” and “The Nest,” among other films.  For her performance in…