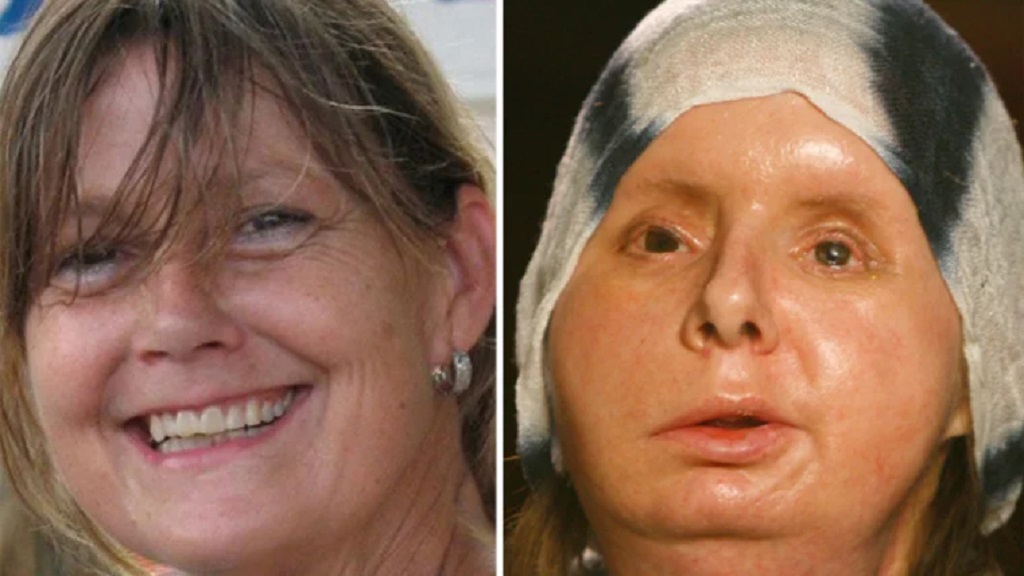 Charla Nash underwent face surgery after a Chimp ripped her face off.

Charla Nash suffered brain damage after being mauled by friend Sandra Herold’s pet chimp Travis, who gouged out her eyes while gnawing off her hands and face.

Nash is still recovering from the attack today, and since the horrifying attack, discussions on owning exotic animals have become more popular.

Yes, Charla Nash has gone through facial surgery after the horrific attack.

She underwent an extensive 20-hour operation in May to replace her torn-off hands and give her a new face after being mauled by a friend’s pet chimpanzee in 2009.

Here’s her before and after surgery picture.

On February 16, 2009, tragedy struck when Travis the Chimp, a chimpanzee who had grown popular across the country over the years, brutally attacked Charla Nash, a close friend of his owner.

Nash was disfigured, and Travis was killed in the attack, which was the result of Travis’ increasingly unstable conduct.

Travis Nash has known Charla Nash since he was a child, but in 2009, he attacked her.

It’s difficult to decide which of Sandra Herold’s hopeless sobs during the 911 call, in which she describes how her beloved chimp is “eating” her friend’s face, or the ape’s hysterical screams, are more terrifying.

Sandra is heard asking authorities to come to her house immediately to shoot Travis, the animal she had reared as her own son for the last 14 years, for an agonizing 12 minutes, according to the Daily Star.

Travis was killed even though the police arrived. Charla Nash, his victim, miraculously lived, but you might argue that in many respects, her life ended abruptly that day as well.

Also Read: What Happened To Tami Roman Face Shape? Has She Had Surgery? Health Update

Who Was Travis The Chimp? He Attacked Charla Nash

Travis, the chimpanzee, was a well-known and well-liked animal performer in his Connecticut hometown. He nearly tore Charla Nash’s face off when he savagely beat her one day in 2009.

Travis’ “mom,” Sandra, had requested Charla, a friend, to stop by and assist in putting the spoiled monkey in his enclosure. However, surprisingly, he snapped, attacking her and biting off her hands and face.

Travis tore off her nose and her eyelids in a display of scary primitive strength.

He practically tore one of her arms off, scalped her, gouged out and ate her eyeballs, and completely chewed off one of her hands.

Her brain was damaged, and her jaw was completely separated from her skull.

It is still unknown what caused Travis, a well-known local figure who enjoyed eating lobster at restaurants, owned a cat and enjoyed riding a lawnmower, to lose it that particular day.

Sandra was the only one who could pinpoint the precise cause of the attack due to Charla’s terrible wounds.

She alleged that Travis aggressively approached Charla before standing up on his hind legs and beginning the vicious assault, which included pushing Charla against the side of her car and gorging on her face and hands.

In a desperate attempt to stop him, Sandra beat him over the head with a shovel and stabbed him in the back with a carving knife, which temporarily worked.

She remembered how, just before she fled for her life and locked herself in her car, he turned around and gazed at her.

Sandra Had Given Travis A Tablet Of Anti-Anxiety Medication

Sandra later acknowledged that she had given him a tablet of the potent anti-anxiety medication Xanax in his morning cup of tea when she had seen that he was being “agitated.”

She added that Charla’s distinctive hairstyle was the reason why he acted brutally.

But it’s also possible that the 200 lb ape’s instincts by age 14 had grown too strong or that he was just tired of living an unnatural life that included preparing his own microwave meals, sipping wine for dinner, and using the restroom like a human.

Sandra purchased an infant chimpanzee from a breeder for $50,000, and she had held Travis since he was just three days old.

An Iranian Woman Mahsa Amini’s Parents’ name is Amjad Amini and Mojgan Amini. Mahsa took the headline of many news after being killed by the Police for not wearing Hijab.  The demonstration broke out after Mahsa died in Police custody on September 16. The Police arrested Mahsa for reportedly violating Iran’s strict Islamic dress code…

There is a trending topic about Lisa Jennings’s Murder. After this news, the citizen is hyped to know more about this news. A man from Philadelphia is suspected of killing his aunt with a knife and then dumping her body in Neshaminy State Park after the crime was committed. Andrew Jennings, age 20, was taken…

What is Mahsa Amini Religion? On September 14, Amini was killed due to Police violence: Stay tuned for more information regarding her death. Omar Mahsa Amini is approximately 22 years old, born on June 22, 2000 AD. Amini was arrested by Morality Police officers near Shahid Haghani Metro Station on the Shahid Haghani Expressway in…

Messy Mya Shot, Many media outlets are going in again with this headline more than a decade after the death of the popular internet personality.  Messy was a very famous rapper during his prime. In 2010, the rapper was shot and died from his injuries. Even decades after the incident happened, people still recall the…