The first female MMA fight took place in the USA in 1997. Since then, many females have taken part in MMA.

There are some incredible female MMA fighters. They have successfully created names for themselves.

Are you excited about our list of the 15 greatest female MMA fighters? Then hang on with us.

Sarah Kaufman (born September 20, 1985) was a dancer since two and is now the greatest and most formidable female MMA fighter.

On June 1, 2007, she won Valérie Létourneau via TKO in the second round, the first female MMA fight in the promotion’s history.

Also, read about The Top 30 Richest MMA Fighters in the World.

She competes in the UFC (Ultimate Fighting Championship)’s strawweight division.

At age five, Namajunas started learning taekwondo and earned a junior black belt at nine. Then she began to learn both karate and BJJ.

<<Who Is Scump On Twitch? Age Real Name And Twitter Explored>>

She competed in an amateur MMA competition in 2010 and went 4-0, with two victories by TKO and two wins by decision.

Also, she uses a wide range of angles and inventive tweaks to crush her opponent.

Moreover, she has 4 Amateur record breakdowns where her opponent couldn’t defeat her.

Jing Nan originally trained to board the weightlifting career. However, she found her passion in boxing instead.

Jing Nan is the first and only woman to win the ONE Women’s Strawweight World Championship.

Also, Jing Nan has a professional MMA record of 15 wins and 2 losses out of 17 matches.

Furthermore, she has defended the belt multiple times with aplomb, including defeating ONE Women’s Atomweight World Champion Angela Lee for the first time.

Tara LaRosa (born January 8, 1978) is a professional mixed martial artist from America who is also a grappler.

She found most of her success while competing for the BodogFight.

She was the first and only Bodog Fight Women’s Bantamweight Champion (135lbs).

In addition, Tara was inducted into the Martial Arts Hall of Fame of New Jersey in 2013.

Also, LaRosa is a purple belt in Brazilian Jiu-Jitsu and a brown belt in Judo. She has a professional MMA record of 22 wins and 5 losses.

Also, read about the 12 Major Athletes in the World Right Now.

While hitting the opponent’s head with solid jabs, Holm uses a lot of lateral movement.

She frequently waits within the pocket to attack with counter-strikes, usually with a straight left hand.

Such fighting style might be why she became the first and only female fighter to win both UFC and boxing.

Furthermore, Holm has an MMA record of 33 wins, 3 losses, and 3 draws.

The professional female MMA fighter from Brazil, Claudia Gedelha (born December 7, 1988), is competing in the strawweight division of UFC.

Furthermore, Gedelha is ranked number 8 in UFC female strawweight division. Also, she is a second-degree black belt in BJJ.

Likewise, Claudia has a professional MMA record of 18 wins and 5 losses.

Claudia has conquered the Fans Favourite Fighter of the Year Award 2013, Fight of the Night award two times, and many more.

She began martial arts training because she had to bike alone to and from school through a lonely portion of the forest.

Also, she had heard legends about “filthy men in the forest” who preyed on females. So, learning martial arts was for her protection.

Former Strikeforce Women’s Bantamweight Champion has a record of 8 losses and 23 wins.

She the first-ever East Asian or Chinese to hold any title in UFC.

Fans even considered her the best fighter to compete in the KLF competition.

In addition, Weili has a record of 21 wins and 2 losses out of 23 matches till now.

On December 5, 2009, Maia made her first MMA debut and conquered all the first four fights in the first round.

Former Invicta FC Flyweight World Champion Maia has won the Performance of the Night Award against Joanne Calderwood in UFC.

Moreover, Shinashi specializes in judo, Brazilian jiu-jitsu, and sambo, which might be a plus point for maintaining such an impressive professional MMA record.

And the fighter is currently ranked #2 in the UFC women’s pound-for-pound as of November 23, 2020.

Shevchenko is widely known for her uncanny ability to judge an opponent’s attack range and return various counterattacks.

In addition to her striking, she is a black belt in Judo and a highly proficient grappler.

She has a professional MMA record of 21 wins and 3 losses.

Also, she has accomplished UFC Performance of the Night (Three times) and Most wins in the UFC Women’s Flyweight division.

Also, read about the 12 Best Gymnasts in the World Right Now.

Joanna Jedrzejczyk (born on 18th August 1987) is a professional MMA fighter from Poland.

Currently, Joanna is competing in the women’s strawweight and flyweight division of UFC.

Former UFC Women’s Strawweight Champion Jedrzejczyk is considered one of the best female fighters. Jdrzejczyk is recognized for her controlled and precise striking.

Jedrzejczyk is currently ranked 2 in the UFC women’s strawweight as of October 19, 2020.

Furthermore, she is a former Muay Thai kickboxer with a professional MMA record of 16 wins and 4 losses.

Her significant accomplishments are UFC Most title fights in UFC women’s divisions and UFC Performance of the Night (once).

The female MMA fighter has also won the Fight of the Night (three times), the Most wins in UFC women’s strawweight history, and many more.

Ronda Rousey is a former American fighter well-known for her grappling prowess, particularly for her armbar victories.

Rousey began her MMA career after winning bronze in judo at the 2008 Summer Olympics, making her the first American woman to win an Olympic medal in the sport.

She made her MMA appearance for King of the Cage before joining Strikeforce.

The fighter became the final Strikeforce Women’s Bantamweight Champion before the UFC purchased Strikeforce in 2011.

Additionally, she was the first female fighter elected into the UFC Hall of Fame in 2018.

Likewise, Ronda Rousey has a professional MMA record of 12 wins and 2 losses.

In addition, the talented female MMA fighter has also acted in the movies such as The Expendables 3, Furious 7, Mile 22, Mortal Kombat, etc.

In addition, She currently competes in Bellator MMA as of January 2021.

Cyborg is also former Brazilian jiu-jitsu and Muay Thai fighter. Likewise, she has a professional MMA record of 24 wins, 2 losses, and 1 no contest.

Furthermore, she conquered many MMA awards like (2010, 2009) Female Fighter of the Year and 2013, Featherweight of the Year.

In addition, the fighter also conquered 2011 Female Fan Favorite of the Year (2010, 2009), Female Featherweight of the Year, and many more.

Amanda Nunes (born on 30th May 1988) is a professional MMA fighter from Brazil who is currently a dominating champion of the Bantamweight and Featherweight divisions.

She is the first woman in UFC history to win two divisions. Nunes is primarily recognized as the all-time most superb female MMA fighter.

Amanda Nunes is currently ranked number 1 in the UFC women’s pound-for-pound as of June 2, 2020.

Moreover, Amanda Nunes was a blackbelt in Brazilian jiu-jitsu and a brown belt in Judo. 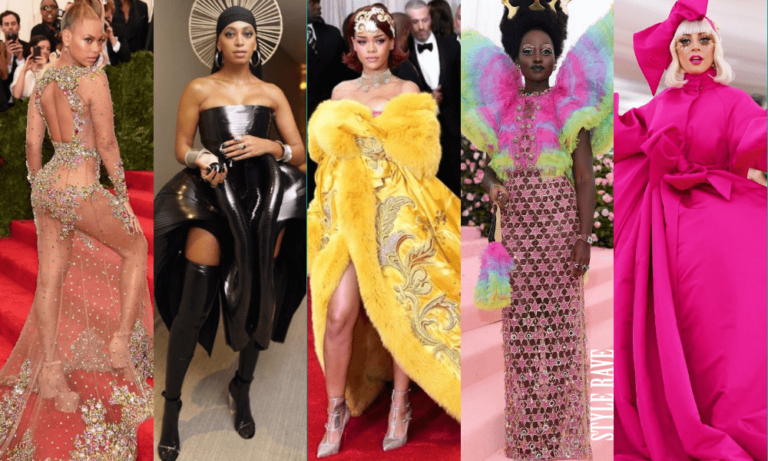 Since its inception in 1948, the annual Met Gala has been a star-studded event. While the fashion world changes daily, celebrities’ bold and creative sides have also transcended through revolutionary designs.  However, it wasn’t until late-1990 that stars began to show off their unique red carpet dresses. This list features the 13 most memorable gala…

Fashion is all about passion, desire, and expressing ourselves to the world without limits, boundaries, and hesitation. Someone once said, “Life is too short to wear something boring,” and every part of this statement is true! Life isn’t perfect, but your style and outfit can be, so wear it in a suitably right way. As…

Every year, the Met Gala, a fundraising event organized by Vogue (since 1948), returns to the Metropolitan Museum of Art. Part of the fun at the Met Gala (the celebrity-filled party) is seeing a considerable number of celebrities.  On the other hand, the celebrities will have to experiment to find the appropriate outfit for the…

With the surge in technology and the internet, online games have become a significant cultural phenomenon. The most obvious example of online games is MMORPGs or MMO (Massively Multiplayer Online Role-Playing Games). MMOs attract a huge number of player communities that can be even larger than the population of many small to medium-sized countries. The…

Sports are immensely popular in India. As a result, the love of sports continues to become dominant in Indian culture. Also, sports is one of the things that draws Indians together, whether it’s screaming to support their favorite players or shouting at the TV during the Cricket Match. Thus, sports are an important part of…

The football craze is still high and wild despite the Euros 2020 and Copa America ends. So who do you think are the 13 famous football players of ? Euros and Copa America ended, and Italy and Argentina have crowned the champions. This seems like a good time to summarize the player’s performance and list…