Have you watched the X-Men film series? If yes, you definitely must know James McAvoy!

The Scottish actor has been in the Hollywood industry for a long time and could be called a veteran.

Did you know that McAvoy won the Best Villian Award for his incredible acting in Split?

Besides acting, McAvoy is also famous for his philanthropic works.

If you want to know about McAvoy’s hot news and spicy information, you better read the article till the end!

James McAvoy Sr., Jimmy’s father, was a bus driver who worked as a builder, while his mother, Elizabeth Johnstone, was a psychiatric nurse.

The actor grew up in a Roman Catholic family. Sadly, his parents divorced when he was 11.

And since his mother suffered from poor health, James went on to live with his grandparents, Mary and James Johnstone.

So, most of the actor’s childhood was spent in Drumchapel with his old buddies, where his mother would occasionally visit him.

In addition to that, Jamesy Boy wasn’t his parents’ single child; he had a younger sister named Joy and a half-brother, Donald.

Moreover, as the connection between James and his father was never good, the actor claims he hasn’t contacted his dad since childhood.

About his education, McAvoy attended the St. Thomas Aquinas Secondary School in Jordanhill.

During his interview in 2006, he said that he wanted to become a priest to explore the world as a child.

Most importantly, life was hard for James as he didn’t have a father figure.

Hene, the youngin, worked at a local bakery to collect some pocket money!

Similarly, James applied to the Royal Navy and got selected but couldn’t join as he was offered to study in the Royal Conservatoire of Scotland.

In such a manner, the actor completed his Alma Mater in Music and Drama.

Likewise, after graduating in 2000, the actor decided to chase his dreams of pursuing a career in acting. And with that, the boy from Glasgow moved to London.

Likewise, the Scottish actor is 5 feet 7 inches tall and weighs about 68 Kilograms.

McAvoy is slim, has a fit body type, and wears 10 US-sized shoes.

Here’s an article about Kaya Scodelario we wrote especially for you!

James is a humble person and is committed to the ones he loves.

Over the years, McAvoy was in a serious relationship with only two women.

Anne-Marie Duff was James’ first love; the couple first met on the set of Shameless.

Moreover, their chemistry became so dynamic and romantic in the movie that they fell in love.

Similarly, after a year of dating, the British couple decided to marry right ahead and tied the knot on November 11, 2006.

While being married, the couple was joyful and shared their love in interviews.

Anne gave birth to their son Brendan McAvoy in 2010.

Unfortunately, the couple had some problems and decided to call it to quit in 2016 and made a joint decision to divorce on May 13, 2016.

The parents of Brendan initially decided to share a home to minimize the disruption in their son’s life.

The ex-couple shared a home in North London even after the divorce.

Similarly, in 2016, James was rumored to be dating X-Men costar Alexandra Shipp, but the rumor never came to fruition.

McAvoy met his future wife, Lisa Liberati, during the filming of Split.

Additionally, Lisa Liberati was the personal assistant of the director M. Night Shyamalan during that time.

Most importantly, in February 2022, James admitted during an interview with The Guardian that he had secretly married his long-time partner.

After years of speculation and rumors between McAvoy and Lisa, the Scot finally revealed his secret marriage.

The versatile actor debuted in the movie industry in 1995 with the movie The Near Room.

In 2001, James acted in Bright Young Things and Bollywood Queen.

Moreover, we can say that 2004 was a great year of McAvoy as he landed roles in two movies.

In 2005, James acted in The Chronicles of Narnia: The Lion, the Witch, and the Wardrobe.

Amazingly, McAvoy bagged seven movies from 2006 to 2008, all of them were pretty good ones.

Likewise, in 2011, McAvoy made his debut in the X-Men: First Class as Professor Charles Xavier, also known as Professor X.

The actor then showed his versatility in the 2013 movies, Trance, Filth, and Welcome to the Punch, all of the different genres.

Similarly, he portrayed the role of the main character in Victor Frankenstein in 2015.

In 2016, Floyd appeared again as Charles in X-Men: Apocalypse.

That same year, McAvoy acted in Split alongside Anya Taylor-Joy.

Most importantly, 2019 was a glorious year for the British actor who acted in Dark Phoenix, Chapter Two, and Glass.

James McAvoy’s latest involvement in movies comes in My Son and The Bubble.

Additionally, The Bubble was directed by Judd Apatow, and his daughter Iris, and his wife Leslie Mann also star in the comedy film.

Lisa Liberati’s husband’s debut as a voice actor came in 2004. He voiced Hal Tara from String.

In 2011, he landed two other gigs in Gnomeo & Juliet and Arthur Christmas.

Likewise, McAvoy is widely famous for his cameo in the movie Muppets Most Wanted, where he appears as a delivery man.

Similarly, in 2018, the Scot also had an uncredited cameo scene in Deadpool 2, where he appeared as Charles Xavier.

His other work includes Hazel in the 2018’s animated series Watership Down.

The Scottish Superstar made his TV debut in 1997 on The Bill. He only returned to the small screen in 2001 with series like Band of Brothers, Lorna Doone, and Murder in Mind.

Most importantly, the British actor portrayed the role of Steve McBride in Shameless from 2004 to 2005.

Likewise, in 2005, James McAvoy appeared as Joe Macbeth in an episode of Shakespea Re-Told.

That year, he appeared as Lord Asriel Belacqua in His Dark Materials; the fantasy drama series is still running and is rated 7.9 by IMDb.

Rachel Weisz is an English actress you would want to read more about!

The talented actor made his stage debut in 1999’s West Side Story as Riff, followed by Romeo and Juliet and Beauty and the Beast the same year.

His other acclaimed works include The Tempest, Lovers, Out In The Open, Privates on Parade, Breathing Corpses, Three Days of Rain, Macbeth, and The Ruling Class.

Besides acting, James is also respected for his voice.

In 2013, McAvoy gave voice to Richard Mayhew in the radio drama Neverwhere.

Likewise, in 2015, he was the voice actor of Marlow in Orson Welles’ Heart of Darkness.

Similarly, the versatile actor who previously was a video game addict gave voice to the Team Radio in F1 2016, the racing game.

Moreover, Jimmy gave voice to the superhero, Dream in The Sandman in 2020.

James is a famous Scot in Hollywood who has been in the limelight for a very long time.

Despite his fame, the actor has remained on the safe side; he has not been involved in many controversies.

Moreover, James’ acting was so realistic in Filth that he was hated by the audience for his villainous role as Bruce Robertson.

Just imagine the level of acting he produced, to hate the actual person who acted in the movie.

Here’s an article about the late American actor William Hurt.

The child who didn’t grow up with his parents always knew the importance of a family.

In 2011, James performed a BASE jump from the tallest hospital to raise money for Retrak. He would go on to help Retrak often from that point!

Most importantly, the actor would donate the money to the charity event for the children in the streets of Uganda.

Similarly, McAvoy is also a supporter of the British Red Cross.

He went to Uganda with the organization for an awareness program.

In addition to that, the child went to study at the Royal Conservatoire of Scotland.

Recently after the global pandemic, the actor donated £275,000 to help the NHS in a pandemic campaign.

James Andrew McAvoy Jr. has an estimated net worth of $20 million.

The actor mainly earns from his acting salary and some from his sponsors.

It is known that James has an annual salary of $3 million.

Similarly, James shares many photos on his account, with 4.1 million followers and 535 posts.

You would love to read about the supermodel Gigi Hadid!

McAvoy is a vast Celtic FC supporter; the football lover has been a Celtic fan since a child.

Moreover, he states that Jimmy Johnstone was one of his best players and would love to act as him in a movie!

The actor who has given voice in 2 video games was once a video game addict.

Moreover, James played the games like The Elder Scrolls, Secret of Mana, and The Legen of Zelda.

Furthermore, he once burned a CD of Oblivion to get rid of his video game addiction. 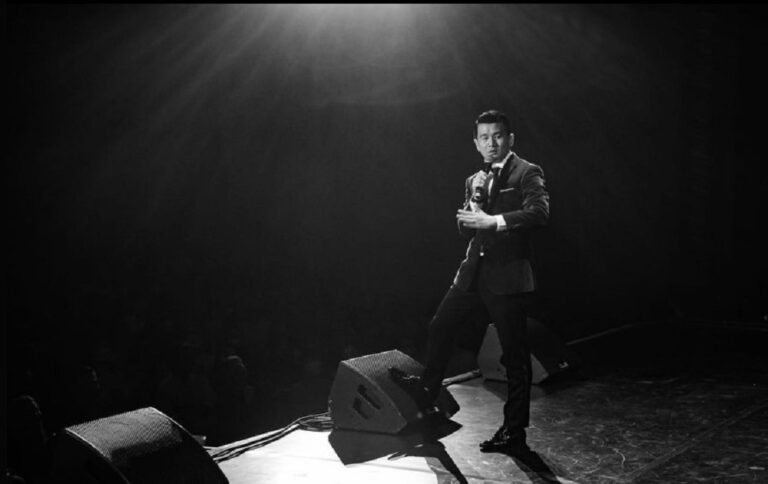 Fans are curious about Ronny Chieng Wife, Hannah Pham. Read on to find out how they first met, when they got married, and if they have kids. Ronny Chieng is a comedian and an actor based in New York City. He was born on November 21, 1985, and is years old. Chieng is of Malaysian-Chinese…

Cody Calafiore Wife is the question popping out among the fans of a celebrity personality. They want to know the details about his marriage with Cristie LaRatta and his kids and net worth. Cody Calafiore is recognized as a famous American reality television personality. He actively works as an actor and producer, contributing to the…

People are curious about Sammy Peralta from Kaleidoscope as the actor is also a singer who has been singing his entire life.  Sammy Peralta enjoys music. That simple reality shines through as he sits at his keyboard, playing with half-written compositions saved in the rack-mounted computerized studio he’s painstakingly assembled in his enormous Washington Heights…