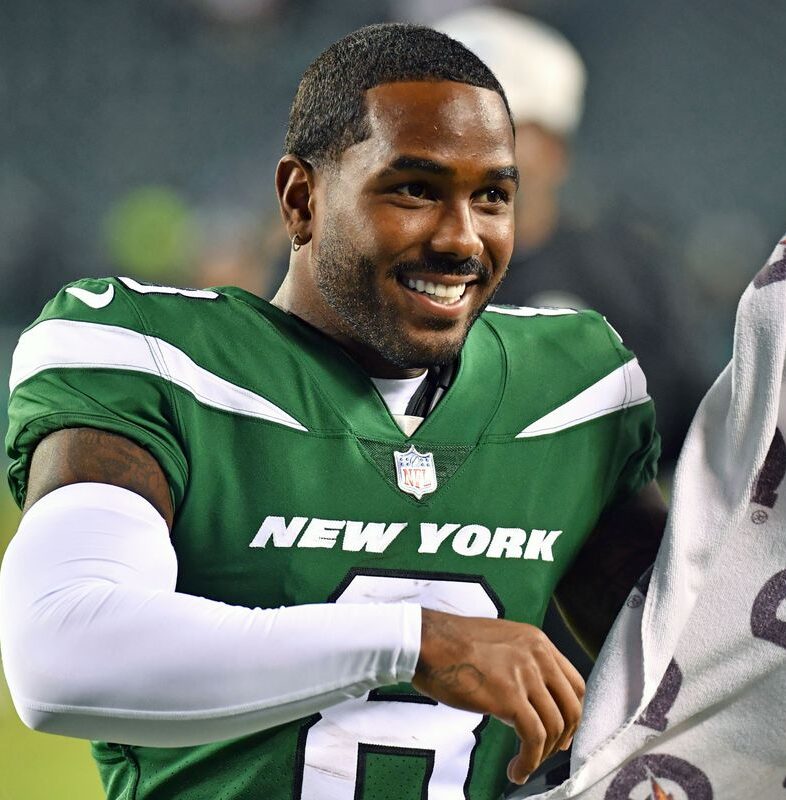 The American Football’s Wide receiver for New York Jet, Elijah Moore, is a prominent athlete known for his fantastic performance. Today we dig deeper into Elijah’s early life, his parents, and his basis for becoming the star he is today.

Elijah Moore was selected by the New York Jets. This was in the second round of the 2021 NFL Draft. On July 21, 2021, Moore and the Jets reached a four-year, $8.94 million rookie agreement.

When Moore’s first season got underway, he was the starting wide receiver. He recorded seven receptions for 84 yards and two touchdowns in Week 9 against the Indianapolis Colts, in addition to his first career score.

Elijah Moore’s early life: Who are Sean and Elisa Moore?

Elijah Moore was born to father Sean Moore and mother Elisa Moore on March 27, 2000. He was raised in the state of Florida and attended the St. Thomas Aquinas High School.

Moore played American Football throughout his high school years. He has been a fantastic player since school and continued his sport till college.

Moore caught 28 receptions for 407 yards and five touchdowns as a senior. This earned him the distinction of Under Armour All-American. He initially chose Georgia over 33 other scholarship offers as a four-star prospect to play collegiate football. In December of his senior year, Moore withdrew his pledge to Ole Miss.

Moore caught 36 receptions for 398 yards and two touchdowns as a true freshman. Moore became the Rebels’ top receiver with 67 receptions, 850 receiving yards, and six touchdown catches as a sophomore.

Moore received a 15-yard unsportsmanlike conduct penalty in the 2019 Egg Bowl against Mississippi State for impersonating a dog and peeing in the end zone after the score. Ole Miss lost 21-20 as a consequence of the extra point try being changed from a 20-yard effort to a 35-yard attempt. Ole Miss fired head coach Matt Luke as a result of the defeat.

Moore entered his junior season on the watchlist for the Biletnikoff Award. Moore had the second-highest number of receptions in a game in school history with 10, for 227 yards, versus Florida in the season opener.

On October 31, 2020, in a 54-21 victory over Vanderbilt, he set a new school record for receiving yards in a game with 238 and tied the Ole Miss game marks for receptions with 14 and touchdown catches with three.

Moore opted out of his senior season before the Rebels’ last regular-season game to start his preparation for the 2021 NFL Draft. He concluded the year with 86 catches for 1,193 yards and eight touchdowns in eight games played.

Elijah is a top player for the Jets but is not yet wed or engaged. According to the online reports, he is not even now dating or seeing anyone.

The same thing is said on even his Instagram. He is rather forthcoming about his family and parents. Therefore we anticipate that he will do the same with his dating news.

Elijah Moore is a successful Football player and has been able to amass a good net worth. His net worth is estimated to be $3.5 Million. He is a Christian by religion. He was enrolled in the University of Mississippi. His height is 5 feet 8 inches. His ethnic background is African-American. He is 22 years old.

Mathew Edward Fraser, also known as Mat Fraser, is a retired Canadian-American athlete. The athlete has won several CrossFit games throughout his life. Mat was the first and only person to win five CrossFit matches consecutively. The dominant fitness athlete has created history. Some people dedicate their hard work to the things they want and…

Cecile Lamb Since he initially played for the Dallas Cowboys, several other hairstyles have been created, with the most well-known being. Investigate some facts about his hair. American football wide receiver Cedarian “CeeDee” Lamb plays for the Dallas Cowboys of the National Football League (NFL). He attended Oklahoma for his collegiate football career before being…

This year, 2022, has not been kind for Deandre Hopkins. Deandre Hopkins was arrested for criminal speeding and also out of the game for using drugs.  There is an interruption to play for the 6-game season from the NFL. His transgression of the league’s drug policy has made him stand out from the game.  In the…