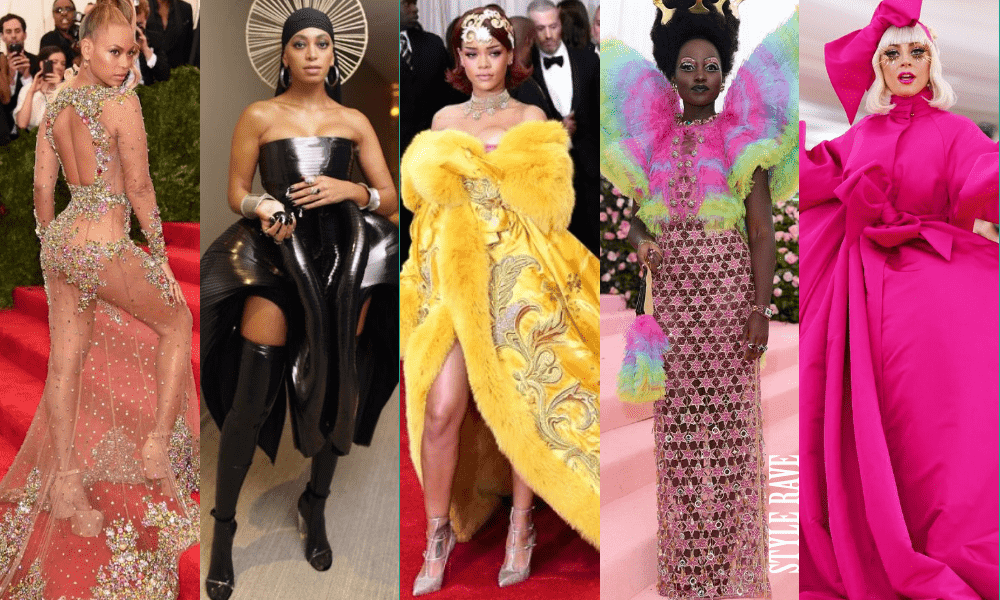 Since its inception in 1948, the annual Met Gala has been a star-studded event.

However, it wasn’t until late-1990 that stars began to show off their unique red carpet dresses.

This list features the 13 most memorable gala red carpet fashions.

Excited? We know we are!!

The late Princess Diana wore a navy blue, full-length Dior slip gown with black lace cut at the bust in the 1996 Met Gala.

She wore it with a massive pearl choker, and the whole ensemble was her best fashion moment.

Additionally, she did not want to wear the dress because Princess Diana was concerned that its revealing nature would belittle her then-14-year-old son William.

Theme: In America: A Lexicon of Fashion

Pete Davidson wore a stylish ensemble to the 2021 Met Gala, deemed a “cool dress” by the media and the comedian himself.

Davidson wore a black mid-length gown and a white blazer with black trim to the annual Met Gala.

He completed the appearance with black socks, black combat boots, and dark sunglasses.

However, his outfit had a hidden significance as well.

The Met Gala was held just two days after the 20th anniversary of the tragic September 11, 2001 attacks.

To pay tribute to his father, Davidson wore garnets, his father’s birthstone, in the shape of an ancient necklace.

Diane Kruger is a former fashion model and actress of German and American descent.

Furthermore, she completely charmed the audience when she walked down the red carpet at the 2018 Met Gala.

Furthermore, the dress was even more stunning with the pouf sleeves and long train.

The use of a netted hairpiece emphasized the fairytale-meets-angelic concept.

Bianca Jagger’s Met Gala ensemble from 1974 has jubilantly stood the test of time.

Her halter neck Halston gown was complemented by a perfectly matched embellished beret and jacket.

Furthermore, combining clean lines and copious sparkle enabled Jagger to pull off the look with ease.

The whole style looked magnificent and was enhanced by her minimum yet sufficient accessories.

In addition, Jagger completed the look with low-key makeup and simple side-swept hair.

Campbell went all out for her first Met Gala to appreciate the Costume Institute’s Theatre De La Mode showcase.

She made sure that she would be welcomed back as a guest of the late Gianni Versace.

Naomi’s multi-colored high-waisted skirt had a definite retro vibe to it. She accessorized her glitter bustier dress with a tiny black backpack and pencil heels.

Furthermore, the supermodel makeup also drew the attention of fashionistas.

Theme: Manus x Machina: Fashion in an Age of Technology

Zayn decided to make his MET Gala debut in 2016 as part of the Manus x Machina: Fashion in an Age of Technology theme.

Furthermore, Malik was joined by his then-girlfriend, model Gigi Hadid.

He was dressed in a Versace suit with sculpted metal arms embellished with Swarovski crystals and Medusa specifics.

On the other hand, Gigi looked stunning in a gunmetal dress with a silvery bustier and sheer skirt.

She also enhanced her appearance with some exciting armor rings on her fingers.

Priyanka Chopra received a lot of media attention during the 2017 Met Gala.

After arriving at the Met Gala red carpet, Priyanka drew much attention in a ballgown-meets-trench coat ensemble.

She was accompanied by her now-husband, Nick Jonas, who wore the same designer suit as her.

In addition, both Jonas and Chopra were making their first red carpet appearances at the Met Gala.

The “Goddess of Pop” stunned the world with her fantastic look at the 1974 Met Gala.

Specifically, Cher was dressed in the “Naked dress,” with fashion designer Bob Mackie on her arm.

Like many of Mackie’s signature looks, Cher was hardly covered in black netting, a few feathers, and some well-placed beads.

Theme: In America: A Lexicon of Fashion

Furthermore, her corseted gown also featured a massive skirt with a 15-foot train.

For this year’s Met Gala, the Grammy-winning artist kept it all peach.

“Billie Eilish is a dream in shimmering layer upon layer of tulle and a fit-to-perfection corset bodice,” they titled her picture.

Billie also had a firm policy for her Marilyn Monroe-inspired dress: “NO FUR.”

Zendaya arrived at the 2018 Met Gala dressed as a character and in full costume.

She was dressed as a glammed-up Joan of Arc, the Catholic patron saint.

Roach dressed the “Spider-Man” star in a sequined Versace chain-mail dress with a heavily armored neckpiece and clarified shoulder guards.

In addition, Zendata’s gown was accompanied by a magnificent train.

In faithful Joan of Arc manner, the outfit’s motivation came to Zendaya’s stylist, Law Roach, in a dream.

Harry Styles attended the 2019 Met Gala as one of the event’s co-chairs.

From a distance, Harry may have appeared to be wearing an all-black ensemble, but up close, the features were simply stunning.

His look was complemented by a ruffled bow and flowing lace sleeves.

Harry’s jewelry and nails were two of the best parts of his outfit. The Gala co-chair wore a single pearl earring in his earlobe and a slew of rings on his fingers.

In addition, one of his rings featured a gold H and S for his initials.

Theme: China: Through the Looking Glass

Rihanna has some incredible looks from various Met Gala events.

An imperial yellow, embroidered, and fur-trimmed silk cape with an enormous train was the show-stopping creation at the event.

Despite the night’s theme of “China: Through the Looking Glass,” Rihanna was one of the few guests to wear an outfit designed by a Chinese designer.

At the 2019 Met Gala, Jared Leto replicated a jaw-dropping moment.

Leto was dressed in Gucci, wearing a silky red high-neck gown with shoulder pads and a gemstone body chain.

However, his human head companion took a look to new heights.

In addition, Alessandro finished the head with his trademark wavy locks, which stole the show.

With that, folks, we have ended the list with some unforgettable Met Gala moments in history.

Though we have to admit, the absence of some A-listers like Rihanna, Zendaya, and Lady Gaga did leave a huge blank spot in the event. Hopefully, we will get to see them next year.

Who do you think are the richest athletes in the world? Through their skills and hard work, they have managed to get at the top of the sport, and as a result, they are paid massive amounts of money to showcase their skills. Over years and years of hard work, they rose to the top,…

Tennis is an unforgiving game. Matches are long, and the weather can be extreme. On the court, though, all eyes are on just two or four players. Also, this famous sport takes amazing stamina, agility, power, and mental strength. Those who can overcome all of it and can win the Grand Slams to become a…

Who would not love to get a hold of the most expensive coin with them? Coins are the most prized possession. After all, they are a literal piece of history. Different rulers and monarchs have issued several coins throughout world history for different purposes. They can be either for general purposes, or they may be…

How often do you watch a wrestling match? Are you one of those regular watchers who enjoy a good fight with intense anticipation of who will take the glory of winning? If your answer is yes, then you know the thrill and excitement the game provides to its audience. The entertainment factor paired with the…